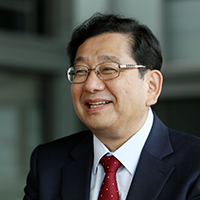 The Japanese government has recently focused on finding evidence to counter the logic of those opposed to the use of Japan's "rising sun" flag at the upcoming Tokyo Summer Olympics.

The leading example of this drive is Tokyo's search for old works of art to prove that the rising sun flag has been a traditional flag in Japan since ancient times. To this end, the Japanese government has researched artworks in all forms including paintings to back its claim that the flag was widely used by its people even before its designation in 1870 as the official flag of the Japanese army.

Despite its efforts, Japan has not produced results. This is because the rising sun flag was widely used after 1870, when it was designated the official flag of the imperial Japanese army.

Nevertheless, Japan did find two paintings to use for its cause. One of them, "Three Great Bridges," is part of the "One Hundred Views of Osaka" series painted over seven years from 1853. The Japanese government argues that the rising sun is depicted in the painting. In the picture, about a half of the sun is drawn above the horizon and 17 rays emanate from the sun's half-circle-shaped center. The shape of the rising sun in this picture, Tokyo claims, was drawn before 1870. Even if this is the case and under the assumption that the rising sun image was popular in Japan at the time, it is incomprehensible as to why that just one out of the 100 paintings has a drawing of the rising sun. Rather, this means the rising sun image was not that common in Japan before 1870.

The other painting the Japanese government found is that of a fishing boat from the 19th century with a rising sun drawn on it and half of the sun on the horizon with seven rays.

The problem with these two paintings is that neither can be used as definitive proof to back Tokyo's claim. This is because the shape of the sun and that of the sun's rays in both works are different from the original pattern of the rising sun flag commonly known today.

The rising sun flag must have 16 rays from the sun's center, and various shapes can be also made from such a basic form. Since the flag was created on a chrysanthemum-shaped emblem with 16 petals symbolizing the Japanese royal family, however, destroying the basic shape is impossible.

At the time, the ministry was led by three vice ministers, all of whom were from the feudal Choshu Domain (now Yamaguchi Prefecture), and they established the pro-modernization Meiji government by destroying the Tokugawa shogunate. The domain's leader was Masujiro Omura, the central figure behind Choshu's cavalry regiment that later became the Japanese military.

In 1869, Omura built a shrine in Tokyo that was originally located in the domain to commemorate the country's war dead. He chose the chrysanthemum emblem of the Japanese royal family as that of the newly built shrine. When the shrine's name was later changed to the Yasukuni Shrine in 1879, the shrine adopted as its own the emblem resembling that of the royal family.

In 1870, the Ministry of Defense officially designed the rising sun flag as the flag of the imperial Japanese army based on the chrysanthemum emblem of both the Japanese royal family and Yasukuni. Today, visitors to the shrine can easily find badges or other souvenirs sporting the chrysanthemum emblems of the shrine and the rising sun flag because of such history; even cookies with such emblems are sold at the shrine.

Thus the essence of the rising sun flag issue can be said to lie in it being the emblem of both the Japanese royal family and the Yasukuni Shrine. No concept of war crimes exists in the lessons to be learned from Yasukuni. For this reason, this place proudly enshrines Class A war criminals in denying Japan's past aggression.

Ultimately, the creation of the rising sun flag was based on the emblems of both the Japanese royal family and Yasukuni. As a result, the flag is a symbol of Japan's past aggression along with the shrine. Thus use of the flag at stadiums of the Olympics, an international sporting festival of peace and harmony, is highly inappropriate.

Clause 2 of Article 60 of the safety and security regulation of FIFA, soccer's world governing body, clearly bans the use of provocative and aggressive action and racism that includes racist behavior and banners and flags that bear provocative or aggressive slogans.

The Japan Football Association has a similar rule in Clause 4 of its match management and administration regulation, which prohibits the admission to stadiums of those who display suggestive (disruptive) flags, placards, drawings and printed materials that display politics, thought, religion, militarism, assertions or ideas. The term "militarism" was added to this clause in February 2010.

Considering this background and context, the International Olympic Committee must follow FIFA in announcing to the world as soon as possible its decision to ban any use of the rising sun flag at stadiums of the Tokyo Olympics because the flag destroys peace and signifies "military" and "aggression."

Hosaka teaches political science at Sejong University in Seoul. As a naturalized Korean of Japanese descent, he is also director of the Dokdo Research Institute.