This is the third part of our series “Food Tourism,” which highlights local delicacies and the culinary history and culture of Korea’s eight provinces. This time, we introduce our readers to Chungcheongbuk-do (North Chungcheong Province). 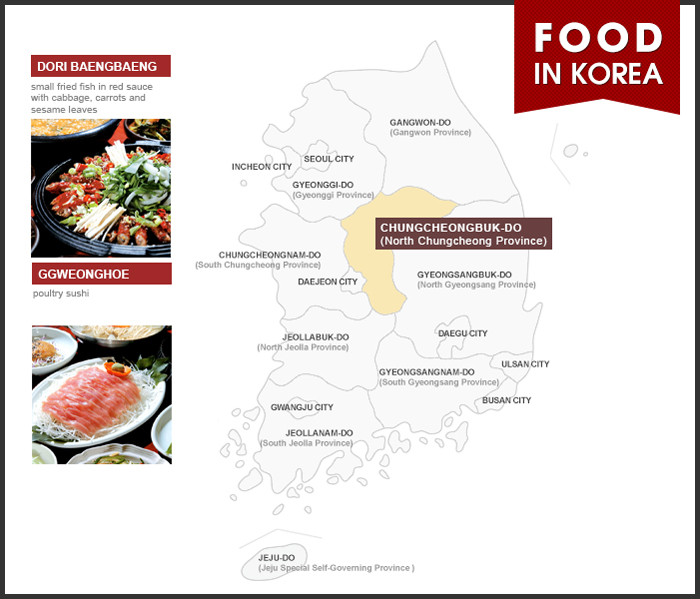 Two major rivers flow through the region: the Namhangang and the Geumgang. Originating from the slopes of Odaesan Mountain, the Namhangang River, or South Han River, passes through Chungcheongbuk-do and flows toward the northwest into Gyeonggi-do (Gyeonggi Province), forming the Han River and eventually flowing into the Hwanghae, or West Sea, just northwest of Seoul. The Geumgang River, or Gold River, flows northward in southern Chungcheongbuk-do but then turns 180 degrees back toward the south, eventually also flowing into the Hwanghae. Thanks to the two water bodies, Chungcheongbuk-do has developed a distinct geographical feature: erosion basins. These form in many of the province’s regions, including Danyang, Jecheon, Chungju, Goesan and Eumseong.

The region is hot and humid during the summer and cold and dry during the winter. The distinctive seasonal changes are clearly visible in this region. Thanks to its temperate climate, the region is home to abundant fruit and other agricultural products.

Today, Korea.net introduces two local dishes that originated in Chungcheongbuk-do. Both these delicacies are highly recommended by the Korea Tourism Organization. 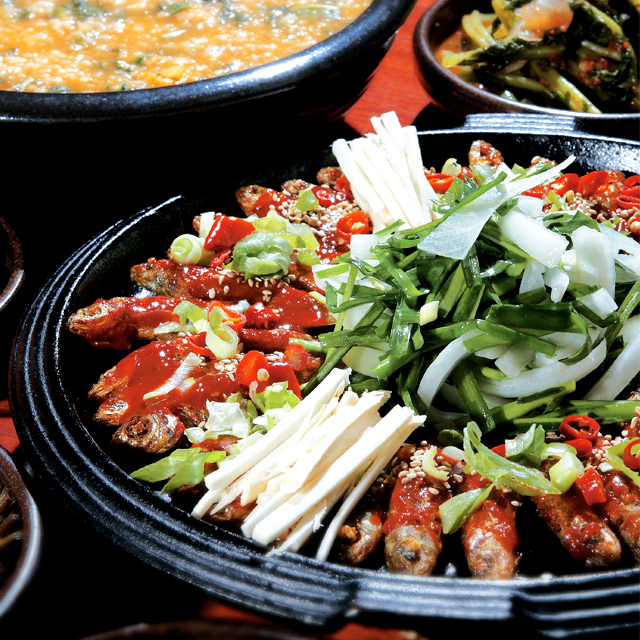 [Dori baengbaeng, small fried fish arranged in a circle with a red sauce and vegetables]

Located in the central inland area of Korea, Cheongwon-gun (Cheongwon District) is just about as far as possible to be in Korea from any ocean or sea. It has small streams but no rivers or valleys. Due to its geographical features, the people in the region can never get enough fish. They could catch some freshwater fish, but they were so small they weren’t any good for either boiling or for grilling over an open flame. So the people of Cheongwon, thus, came up with a third option: fry the freshwater fish in a pan.

This is how dori baengbaeng is cooked. The tiny fish are placed in a ring around the outside of a large round frying pan and cooked with some oil. Then, the dish is seasoned with condiments of garlic, ginger and chili, spread on the top of the fish. It is crispy and tasty and the whole cooking process is interesting to watch. The word dolda means to go around or to turn and the word baeng baeng describes the action of making something into a round shape. Thus, the dish got its name.

Cheongwon’s dori baengbaeng is normally prepared with a freshwater fish called a chammaja, or a long-nosed barbell. They live in the upper and midstream area of rivers, close to riverbeds covered with sand and pebbles. Chammaja can also be replaced with carp, minnows or splendid dace. The dish is rich in protein, calcium and minerals. People normally enjoy the dish wrapped in vegetable leaves, either mint, sesame or lettuce. 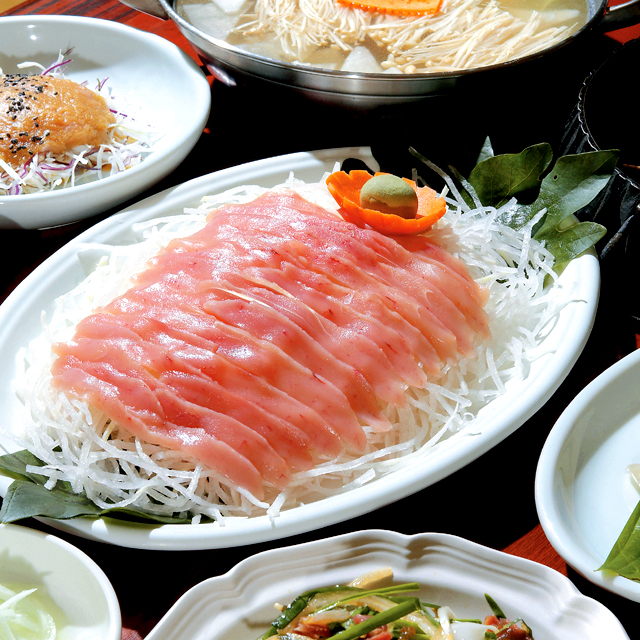 Moving on to our second dish, there are three famous things that represent the city of Chungju, the province’s representative city: Woraksan Mountain, the Suanbo hot springs and a dish of pheasant.

Ever since the distant past, people have regarded pheasant to be one of the best health foods, highly recommended during the winter months. The bird has been enjoyed by people from all walks of life. Commoners created many variations on the standard poultry dish, sometimes boiling it in a soup or sometimes cooking it with dumplings. In the palaces, it was regarded as one of the most popular royal meals.

The pheasant is so sensitive and cautious that humans have found it difficult to raise and feed them. Unlike chickens, pheasants are reluctant in receiving food from human hand. Pheasant demand has always fallen short of supply. The old saying, “Chicken instead of pheasant,” comes from this background.

In Chungcheongbuk-do cuisine, pheasant can be cooked in a variety of ways, including on grilled skewers or with dumplings, or sometimes as a seasoned raw dish. This “poultry sushi” or “poultry tartare” is especially popular in the region. It is called ggweong hoe, or raw pheasant. It is softer than many types of raw fish and is much more savory in taste than other raw meats.

The dish gives you a boost in energy and it is believed to be effective against high blood pressure and diabetes.

The next time you are in Chungcheongbuk-do, Korea.net recommends you try both dori baengbaeng and ggweong hoe, to make the most of your trip to this beautiful, mountainous province.