New Prime Minister Chung Sye-kyun on Jan. 14 takes his oath of office during the nation's 46th inauguration for his position at Government Complex-Seoul. (Office for Government Policy Coordination)

Chung Sye-kyun on Jan. 14 was sworn in as the nation's 46th prime minister and the second of President Moon Jae-in's administration.

At his inauguration held at Government Complex-Seoul, Prime Minister Chung pledged a "government supportive of the people" and said, "With the people, I will unwaveringly push for a nation worthy of being considered a nation where everyone can prosper."

First mentioning the economy in his speech, he said, "I will develop a good environment for corporations and raise the economy's vitality."

"I also pledge to revive the economy of the people's livelihood by expanding support for regulatory innovation, innovative growth, small and mid-size companies, and small business owners." 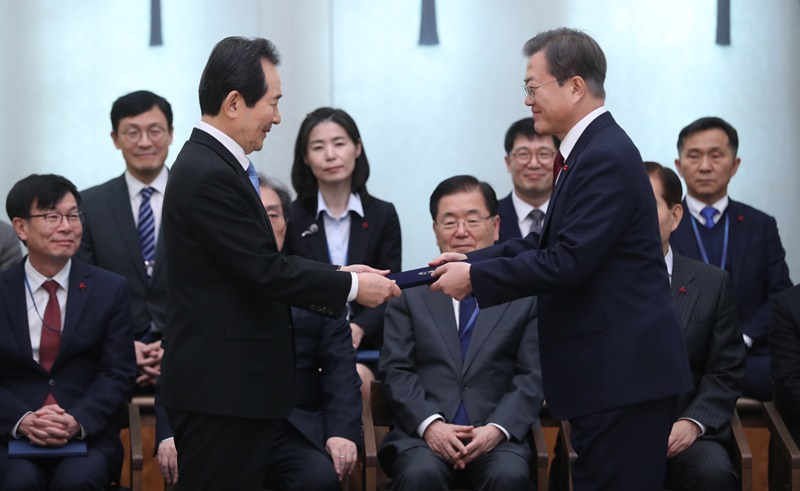 At a conferment ceremony at Cheong Wa Dae held before the inauguration, President Moon Jae-in gave a certificate of appointment to Prime Minster Chung and said, "Restoration of politics of dialogue, compromise and communication is more important than anything else."

The president also asked his new prime minister to lead the Cabinet well through cooperative politics and governance.

Prime Minister Chung replied by saying, "I hope to make good use of our experience and knowhow to successfully lead the second half of the administration's term."