There is a famous woman and patriot in Korean history who is often compared to France's Joan of Arc.

Ryu Gwan-sun (1902-1920) was active in the March 1 Independence Movement in 1919. Ryu was born into a Protestant family in Cheonan, Chungcheongnam-do Province (South Chungcheong Province). In 1918, Ryu registered at Seoul's Ehwa Haktang, the school established by Western missionaries in 1918 that later became Ewha Womans University.

Ryu took part in the street demonstrations that were part of the overall March 1 Independence Movement. After the colonial government ordered all schools to be closed, she returned to her hometown but continued to plan protests. She visited schools and churches in Cheonan and Cheongju in Chungcheongbuk-do Province (North Chungcheong Province) and led demonstrations until she was arrested by the Japanese colonial police. 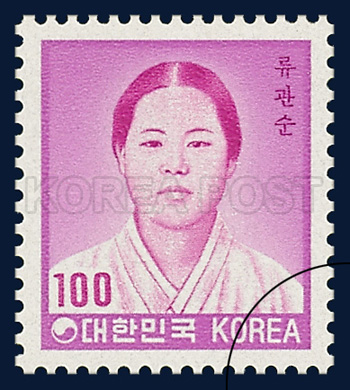 A stamp is dedicated to independence activist Ryu Gwan-sun.

Ryu was later sent to Seoul and put on trial. She was sentenced to three years in jail and served her term at Seodaemun Prison. In prison, she continued to protest Japan's colonialization of Korea, but she died on Sept. 28, 1920, at the age of 19 due to torture and malnutrition.

In 1962, she was posthumously awarded the Order of Merit for National Foundation, in recognition of her work for Korean independence and sovereignty.