The trio of Kim Woo-jin, Ku Bon-chan and Lee Seung-yun defeated the United States team of Brady Ellison, Zach Garrett and Jake Kaminski by the set score of 6-0 at Sambodromo.

South Korea is going for an unprecedented gold medal sweep in archery in Rio. The quest will continue with the women's team event Sunday.

The Olympic archery events are contested in sets, with six arrows per side in each set in team events. Winning a set is worth two points, and a draw is good for one point. The first team to reach five points wins. 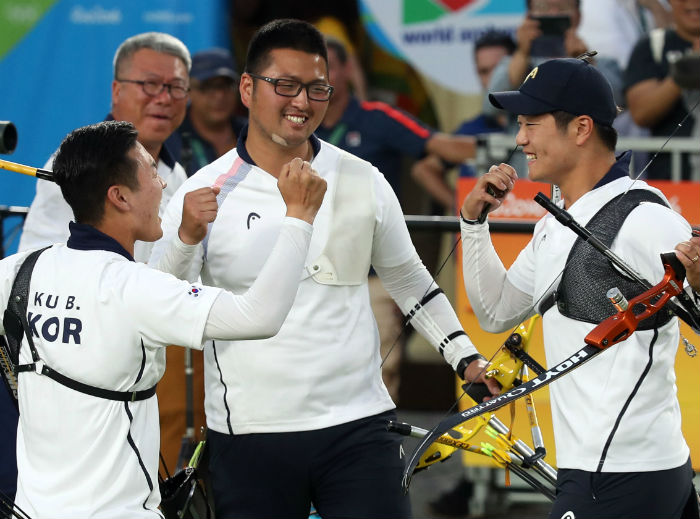 
In the first set, the South Koreans scored a perfect 60 to beat the Americans' 57. The second set was a bit tighter, 58-57 for South Korea. In the clinching set, South Korea outscored the U.S. 59-56, with the last three arrows all hitting the perfect 10s.

The victory was a measure of revenge for South Korea, which lost to the U.S. in the semifinals at the 2012 Olympics. There was no carryover from that team to this year's squad for South Korea, but Ellison and Kaminksi were on the London team for the U.S.

This was South Korea's 20th gold medal in Olympic archery, and the country's dominance in the sport has been well-documented.

At the press conference, Kim bristled at the question that luck might have come into play for his team.

"I absolutely don't think this had anything to do with luck," he said. "We're sitting here because we prepared hard for this and put in a lot of work. I don't think it's right to attribute our result to luck."