Korea gears up for future cooperation on e-government 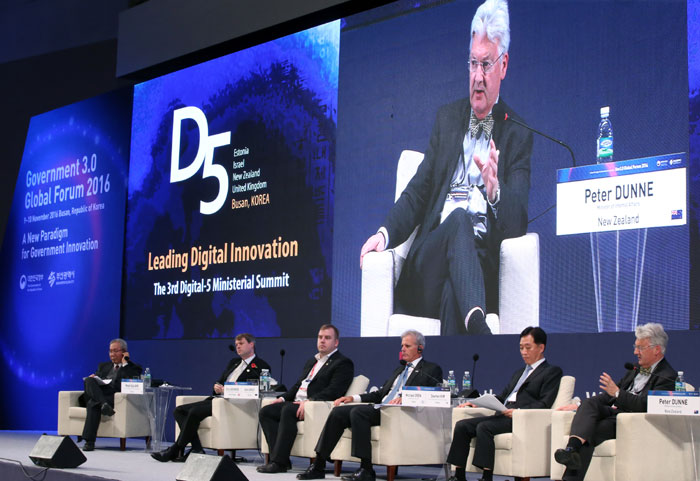 The third Digital 5 Ministerial Summit is held on the future of e-government and global digitalization, in Busan on Nov. 10 and 11. Ministers from the five member countries engage in a discussion during the conference.


The five leading e-government countries gathered in Busan to discuss cooperation on and the future direction of electronic and online government services.

E-government ministers and experts from Korea, the U.K., New Zealand, Israel and Estonia took part in the third Digital 5 Ministerial Summit, in Busan on Nov. 10 and 11, and the theme this year was “Leading Digital Innovation.”

The Digital 5, also known as the “D5,” is a network of countries with leading digital governments. It was formed by the initiative of the U.K. and Korea. The first D5 meeting took place in London in 2014, and Korea chaired this year’s D5 meeting.

Ministers from the five D5 governments take part in a roundtable meeting in Busan on Nov. 10. They discussed innovative policies of digitalization of their governments, and measures to narrow the digitalization gap around the globe.


The D5 meeting is composed of conferences, ministerial roundtable meetings, working level meetings for senior officials, and discussion panels involving experts. In the conference and the roundtable meetings, participants discussed how to set up an exemplary e-government model, how to secure talented personnel in informatization, measures to secure trust in digitalization, and ways to provide customized services.

In the discussion panels and working-level meetings, participants talked about ways to boost user convenience, attract a talented workforce, build trust in digitalization and how to establish a next-generation certification system.

Ministers of the D5 countries will adopt the Busan Communique on Nov. 11 that will propose a vision and future direction of development for e-government.

In the Busan Communique, the member countries will propose to share exemplary cases of e-government and their digitalization policies, consider measures to improve digitalized services among the member countries and develop cooperation measures. The communique will also contain measures to narrow the digitalization gap among countries, and expanding the D5 by accepting new governments that will work to fulfill the nine principles of the D5 Charter. The communique will also contain the agreement reached by the D5 governments where they agreed to boost exchanges with international organizations, the private sector and the academic arena, and to create publications about current issues and model cases of e-government, so that they could share it all with non-member governments.

Minister of the Interior Hong Yun-sik said, “The importance of personal information and cyber ethics is becoming greater as we're living in an era of industry 4.0 and rapid technological change brought about by high-tech IT, such as artificial intelligence (AI), the Internet of Things (IoT) and big data.”

“Through the Busan Communique, I believe that in the future the D5 will become the authoritative international gathering in the e-government sector,” Hong said. 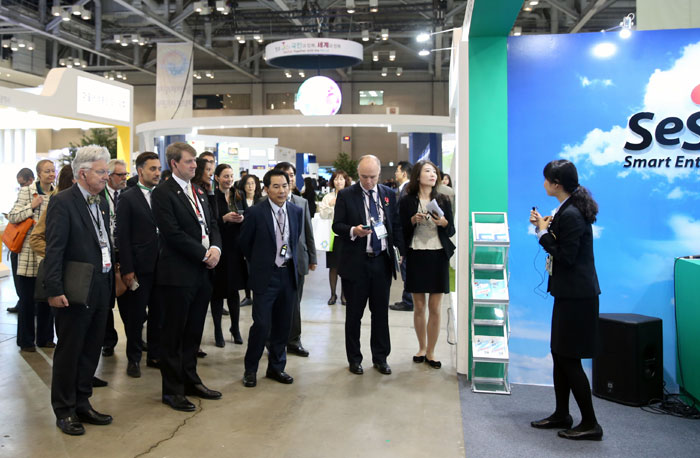 Ministers from the D5 governments listen to an explanation about Korea's smart entry system (SES), during a visit to the Government 3.0 Fair & Global Forum 2016 at the BEXCO convention center in Busan on Nov. 10. 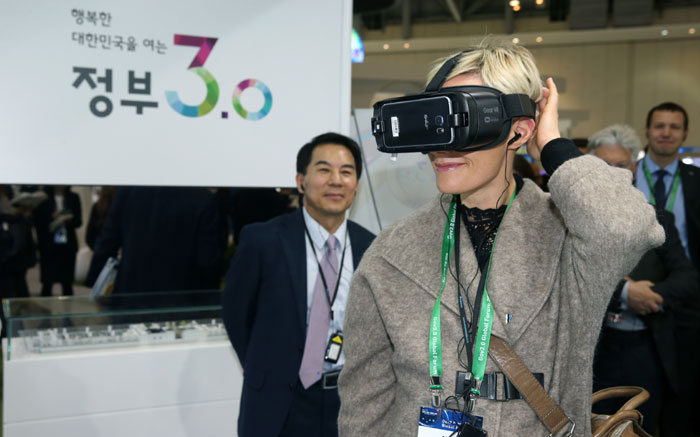 A conference participant enjoys virtual reality at the Government 3.0 Fair & Global Forum 2016 at the BEXCO convention center in Busan on Nov. 10.


Meanwhile an invitational training session involving 13 countries is also taking place in Korea from Nov. 7 to 11.

The program, dubbed the 2016 Korea e-Government Experience Program, aims to share e-government policies and projects of the participating countries and to pursue cooperation measures in the e-government sector. Program participants are vice ministers and other senior officials from 13 countries in the Asia, Europe and Africa, including Mongolia, Algeria, the Czech Republic and Kyrgyzstan.

Program participants will use the Korean government's e-government services as benchmarks, such as Korea's IT-based transport systems, customs clearance systems, and its government integrated data systems. They will also visit related government organizations, such as the Government Integrated Data Center, and hold business meetings with exporters. 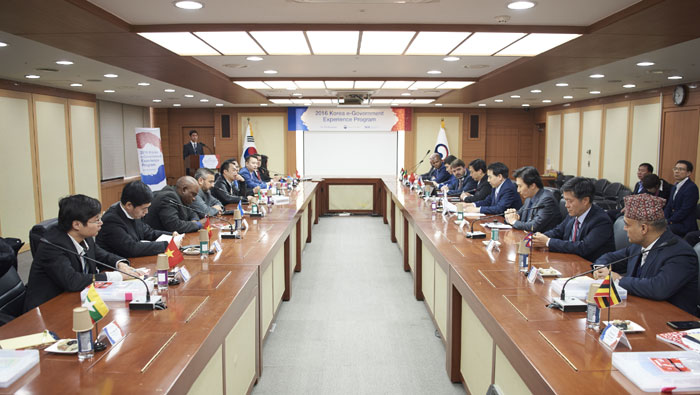 Participants in the 2016 Korea e-Government Experience Program discuss e-government systems in their countries and how they can enhance cooperation on the e-government sector, in Korea on Nov. 7.

Participants in the 2016 Korea e-Government Experience Program pose for a group photo in Korea on Nov. 7.