Lao Ambassador to Korea Thieng Boupha on Aug. 23 discusses bilateral relations between Korea and Laos at his embassy in Seoul.

Since establishing diplomatic relations in 1995, Korea and Laos have cooperated closely in trade, investment and aid projects in health care.

People-to-people exchanges have also played a positive role in fostering ties, according to Lao Ambassador to Korea Thieng Boupha, with such interactions "promoting better cultural understanding among people of the two countries."

With President Moon Jae-in set to visit three Southeast Asian countries – Thailand, Myanmar and Laos – from Sept. 1-6, Korea.net sat down with the ambassador on Aug. 23 to learn more about what defines Seoul-Vientiane relations.

The following are excerpts from the interview. 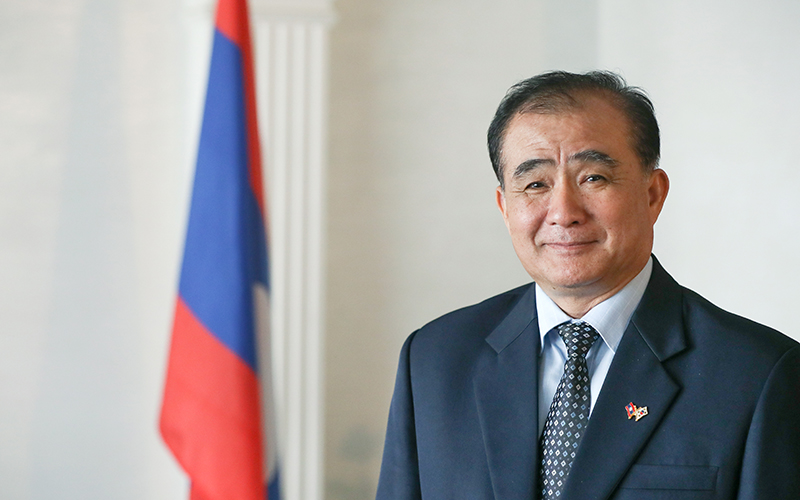 Lao Ambassador to Korea Thieng Boupha on Aug. 23 poses for a picture at his embassy in Seoul.

- You assumed your post in May. As a resident of Korea, what are a few things you've learned about the country? Has your perception of the nation changed in any way?

During my short presence here, I've had the opportunity to learn about Korea's socioeconomic development, particularly its transformation from an agriculture-based economy in the 1960s to the 11th-largest economy in the world in GDP in 2016. Korea's industrialization miracle provides a good model for Laos as agriculture has played a major role for our economy since we launched the New Economic Reform in 1986. I think many things I've learned from Korea's experience can contribute to the overall success of Laos' socioeconomic development.

- The two countries are cooperating in a number of areas. Could you walk us through a few noteworthy facts and figures?

In investment, thanks to incentives such as one-stop service, easing of investment laws and shortened investment procedures, the number of foreign investors to Laos has increased, particularly from Korea. Korean investment in Laos ranks fifth among foreign direct investment countries at USD 270 million in 39 projects across all primary sectors (2010-18).

Official development assistance from Korea has played an important role in Laos' socioeconomic development. In past years, Laos received assistance from Korea through the Korea International Cooperation Agency, the Economic Development Cooperation Fund and other channels. Since 2013, eight ongoing soft loan projects with a combined budget of USD 502 million have been conducted in fields like energy, infrastructure, agriculture and health care.

-The number of Korean tourists in Laos has surged in recent years. How do Laotians perceive Korea and Korean culture?

The Lao government in 2008 introduced a 15-day visa exemption for Koreans and extended it to 30 days last year. Direct flights between the two capitals were also launched in 2011. These can be seen as factors helping increase the number of Korean tourists in Laos.

Korean trends have grown more popular in Laos, with more Laotians consuming Korean culture. Many Korean restaurants have opened in the country, especially in the capital and cities like Vang Vieng and Luang Prabang. A lot of social media channels for beauty use the Korean make-up style, and Korean cosmetics brands are seen at many high-end department stores. Korean fashion is also trendy, and people who follow this trend are seen as having good taste.

- Busan will host a special summit this year to mark the 30th anniversary of dialogue relations between Korea and the Association of Southeast Asian Nations (ASEAN). What are your thoughts on this upcoming event?

We strongly support this initiative. The Lao delegation will be led by Prime Minister Thongloun Sisoulith, who will participate in the Korea-ASEAN summit and the first Korea-Mekong summit. I also think that (both summits) will be a good platform for implementing Korea's New Southern Policy in Southeast Asia. On the sidelines of the (two summits), we will have trade and investment forums, cultural exchanges and discussions on free trade between Korea and Laos, infrastructure, air service cooperation and a smart city network. I wish the summits great success.

I also wish President Moon Jae-in great success during his state visit to Laos in September. I'm looking forward to our relations being further enhanced and strengthened in the future.