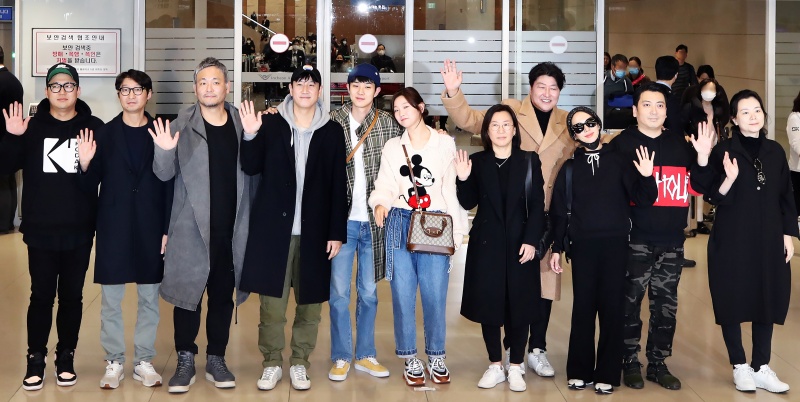 The cast and crew of "Parasite" on Feb. 12 greet a group of reporters after arriving at Incheon International Airport from Los Angeles. (Yonhap News)

By Song Baleun and Lee Jihae

The cast and crew of the blockbuster film "Parasite" have returned home to a hero's welcome after the movie won four Academy Awards.

Kwak said, "Thank you very much and sorry for making you come so early in the morning to greet us," adding that an official news conference will be held later to share more details.

Song, a veteran actor dubbed "Parasite" director Bong Joon-ho's "persona" due to their frequent collaborations, said, "I think we were able to get this great result because of your ceaseless support."

"Through making good Korean movies, we will continue to do our best to promote Korea's outstanding cultural arts to movie fans around the world."

Bong, meanwhile, stayed behind in the U.S. because of a busy schedule. At a news conference held after the Oscars ceremony on Feb. 9, he said, "It was wonderful to go on stage with the cast and crew of 'Parasite' to receive the Best Picture award."

"Our journey that began in Cannes last year has ended in the happiest way possible."