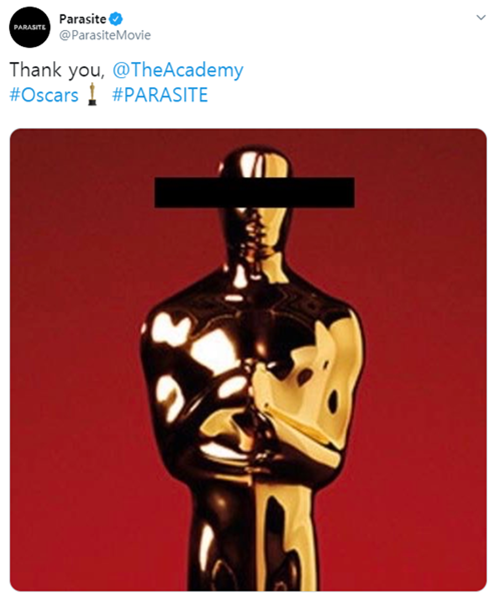 The Oscar-winning film "Parasite" is a hot topic on social media, with plenty of netizens discussing both the movie and its director Bong Joon-ho.

The director on Feb. 9 received a slew of congratulations on social media in real time after his movie won four Academy Awards.

A U.S.-based user with the Twitter handle lpbradley wrote, "Bong Joon-ho just made history," and another named milktpapi added, "We drinking (soju) tonight." A French Twitter user, pierrelescure, said, "Director Bong is a bridge connecting the Cannes Film Festival and (the) Oscars."

A Chinese user with the Weibo handle 泛银河系流浪汉ru7dy(Fan-yin-he-xi-liu-lang-han-ru7dy) wrote, "I envy Koreans. They have BTS in (the) music sector, Son Heung-min in sports and Bong Joon-ho in movies." A Japanese user, pinko61, tweeted, "The average quality of Korean movies (is) high."

Social media also put the spotlight after the Oscars on Bong's other works.

A slew of netizens shared recommended lists and opinions of his other movies. Twitter user jenn1feralfarx wrote, "If you all need a movie to watch after Parasite, watch 'Snowpiercer.'" Jesscandancee added, "There is a life before you watch Parasite and there is a life after and let me tell you I will never be the same."

Users also discussed what Bong's next movie could be.

Elements from "Parasite" were brought up again on social media. The so-called Jessica jingle, "chapaguri," a combination of the instant ramyeon product styled after the Chinese black bean instant noodles Chapaghetti and the spicy udon-like noodles Neoguri, and the film's movie poster were again trending online.

Social media users shared the song that the jingle is based on, "Dokdo Island is Our Land." They also posted photos of chapaguri (or jjapaguri) they made, with one Twitter user, soosdraws, saying, "It's midnight. The best time to make jjapaguri." Another Twitter user, ChelCReal, wrote, "If I buy a steak just to make that jjapaguri, is that a waste of steak?"

Netizens shared parodies of the movie's official poster, in which black rectangles cover the characters' eyes. Many parodies have paid tribute to "Parasite" and its Oscar victory. This photo shows a promotional poster for Chapaguri, a noodle product by Korean food giant Nongshim featured in the movie. (Nongshim)