Korean Catholics recently produced a meaningful music video in celebration of Pope Francis' visit to the nation scheduled for August. Earlier this week, the Preparatory Committee for the Visitation of the Holy Father released the music video "Koinonia" and some of the footage used to create it.

Both the lyrics and melody of the song were produced by composer Roh Young-sim (Maribona). The title is "Koinonia," a transliterated form of the Greek word meaning communion, friendship and joint participation. The subtitle is "We all become a present," which reflects everyone's hope that the upcoming papal visit will be a symbolic present of communion for Korean society. 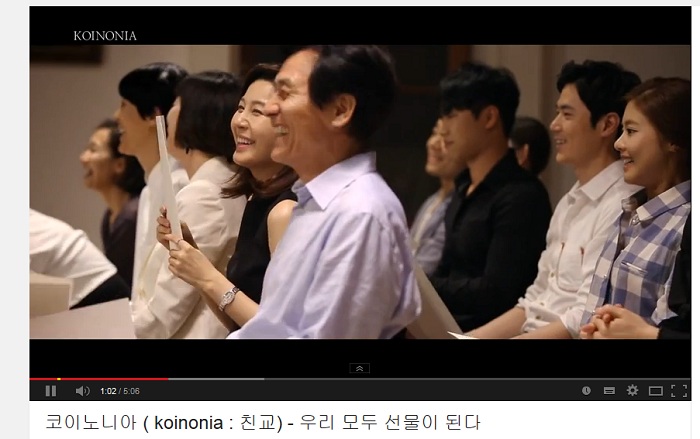 A group of artists and celebrities participated in the production of music video "Koinonia" in celebration of Pope Francis' visit.

The video includes no particularly special scenes. The camera captured all the standard footage of the cast as they sang, prayed and talked to each other. The video was directed by Cha Eun-taek, the director of Psy's music video "Hangover," and was produced by Won Dong-yeon, the head of Realize Pictures, the film company that produced "Masquerade." The song was written by composer Roh Young-shim and the casting was helped along by KBS producer Kim Hak-sun (Francis) and actor Ahn Sung-ki.

Producer Won Dong-yeon said, "Most of the cast decided to take part in the music video in the thought of wanting to give a small present to those who are isolated, or struggling against a hardship. We would be happy if the video and our hopes are shared with more people."

Auxiliary Bishop Basil Cho Gyu-man said, "This music video prepared with the glad hearts of people will give a present to all of us, waiting for the upcoming papal visit, and will enliven the preparation procedures. Thanks for all the participating members and wishing god's peace is with you."

Father Park Gyu-heum, who organized the production said, "We produced this promotional video in the hope that this will become a delightful surprise to everyone in society, jumping over the fence of religion. I hope that our efforts can comfort many wounded hearts."

Every member of the cast agreed to donate their talents for the video production. Profits generated from the online music stores will be used to help the poor and needy in accordance with Pope Francis' wishes. CJ E&M, a music distribution company, will also donate all their profits from the production to charities.

The music video will be available on the official website for the 2014 Pastoral Visit of Pope Francis to Korea (http://popekorea.catholic.or.kr/en) and Good News (http://www.catholic.or.kr). Later, it will be shared through such major search engines as Daum and Naver as well as various Social Network Service channels.