Korea-Turkey friendship: 'next 60 years will be even better' 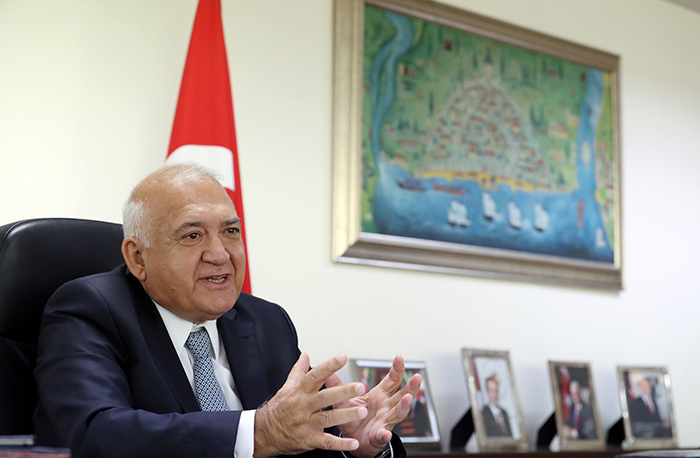 Turkish Ambassador to Korea Arslan Hakan Okcal talks about the close bonds between Turkey and Korea, in light of 60 years of diplomatic ties between the two nations, at the Turkish Embassy in Seoul on March 23.

"The distance between our countries is quite considerable, but there are many possibilities," said Turkish Ambassador to Korea Arslan Hakan Okcal, describing the future that lies ahead for Korea and Turkey. "The next 60 years will be even better," he said.

The two nations, often referred to as "brother countries," officially began their diplomatic relationship on March 8, 1957. The agreement came after Turkey provided military aid during the Korean War (1950-1953).

The past 60 years however, was not the beginning. The countries share a long history dating back several centuries. According to the 6th century text "Samguk Sagi," historical records from Korea's Three Kingdoms Period, the ancient Turkish people of the Gokturk Empire lived in close proximity to the people of Goguryeo.

"The Gokturks used to live right next to Goguryeo and China, and so we came to share social and cultural similarities," said the ambassador. " For example, in Korea we have mandu and in Turkey we have manti. Although we make it a bit smaller, it’s basically the same thing. In Turkish, water is su, which is the same in Korean."

On March 23, Ambassador Okcal sat down with Korea.net and offered his thoughts on the milestones that helped to shape Korea-Turkey relations, and provided some insights into the bright future that lies ahead for the brother nations.

- Since the two nations joined hands in 1957, what are some milestones that have helped to bring the friendship to the next level?

Some of the major milestones include the Korean War (1950-1953) and the Turkish Brigade that served with the United Nations Command, the 1999 earthquake in Turkey, and the 2002 FIFA World Cup that took place in Korea and Japan.

The Turks joined the Korean War in 1950, and fought in the front lines against Chinese forces. We suffered casualties by the hundreds, but the Turkish bravery on the battle field earned us a strong reputation during the war. The Turkish army also took care of many orphans on the battlefield. Eventually, they built the Ankara School in Suwon, Gyeonggi-do Province, in 1952 to look after the children.

Several decades later, Turkey was hit by a big earthquake in 1999. The earthquake, which struck northwestern Turkey with a magnitude of 7.6, killed between 20,000 and 30,000 people. As Korea was under economic constraints at the time, financial support was meager at first. Then some high level Korean intellectuals, including public opinion leaders, came together and raised funds for the Turkish victims. This created a new awareness of the Turkey-Korea friendship, revitalizing our relationship. The movement launched the Turkey-Korea Great Friendship Association.

The 2002 FIFA World Cup quarterfinal match also comes to mind. This was the match between Korea and Turkey, with the bronze medal on the line. The masses of Korean fans, whose cheers echoed across the home ground stadium, were also waving the Turkish colors to show support for the Turkish national team. It was quite moving to see this kind of support, all the way in Turkey through TV broadcasts.

Turkish Ambassador to Korea Arslan Hakan Okcal stands beside a portrait of Mustafa Kemal Ataturk, the founding father of the Turkish Republic, in his office at the Turkish Embassy in Seoul on March 23.

- The Eurasia Tunnel, the 14.5 kilometer tunnel connecting Europe to Asia across the Bosphorus Strait, opened in December last year, thanks to a partnership between Turkish and Korean companies. How do you evaluate the two nation's expanding cooperation on infrastructure?

I actually had the honor to pass through the Eurasia Tunnel in January this year. It was quite an interesting experience. You go 100 meters below the sea and arrive on another continent.

Istanbul is a city that never sleeps, and yet the city has only three bridges. Moreover, the bridges are often blocked, making it a nightmare if you don't arrange a way to travel. We have subways and ferries, but most people will try to pass over the bridge, especially if they're heading to work. Now, thanks to the tunnel, the way home that used to take 2 hours now takes just half an hour.

-Starting this year Turkey and Korea have agreed to come together once again to build the Canakkale 1915 Bridge in northwestern Turkey. What is the significance of this collaboration?

Canakkale Province is an area prone to earthquakes, with magnitudes of around 5 on the Richter scale. Winter conditions are also very tough, with strong winds and cold blizzards. This means the bridge will need to be very carefully built, made strong enough to withstand the strongest of earthquakes. However, I’m confident that the consortium, which includes Korea’s SK and Daelim, and the Turkish companies Limak and Yapi Merkezi, will construct a state-of-the-art bridge. It will be quite a masterpiece once complete.

- The Canakkale 1915 Bridge is due to open in 2023, to coincide with the centenary of the Republic of Turkey. What are some challenges facing Turkey leading up to the big anniversary?

Turkey is going through a period of difficulty. Turkey and Europe cannot avoid each other. There were periods when Turkey was under constraint, like the Cyprus Crisis for instance. We suffered a U.S. embargo for many years. We cannot change geography, nor can we change the orientation of a country so easily. In the future, there will need to be more dialogue and more cooperation.

A lot of Turks are attending university in Korea. We have a community of around 1,000 Turks, and almost half of them are students. I’m a frequent visitor to universities here. Our embassy has good relations with KAIST, for example. One thing I want to achieve during my tenure is to expand cooperation on the technical field, in particular between universities. 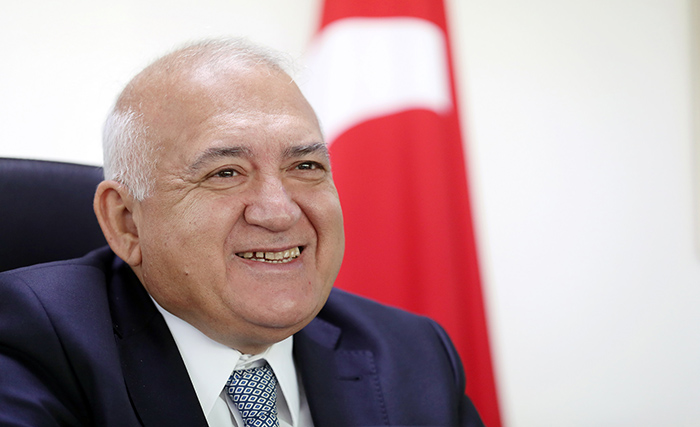 Turkish Ambassador to Korea Arslan Hakan Okcal says that Korea and Turkey are blood brothers, having fought together in the Korean War, during an interview at the Turkish Embassy in Korea on March 23.

- There’s news that Turkish students will be able to learn Korean in primary and secondary schools starting next year.

English is compulsory, and in some schools German and French are also compulsory. It's true that starting next year, certain schools will offer Korean language as an elective course.

There's a lot of interest in learning Korean because of the achievements and the image that Korea is projecting. Younger generations are attracted to Korea because of Korean pop music and TV shows, and thanks to technology, obviously. These days, you can come across all sorts of content at the press of a button.

- Turkey and Korea have been cooperating closely on sports, too. Korea's Kim Yeon-koung currently plays for the Turkish volleyball team Fenerbahce and her games are broadcast on Korean TV. In your opinion, how can we further increase cooperation on sports?

I was actually just watching Kim Yeon-koung playing for Fenerbahce on TV last night. They tell me Kim Yeon-koung learned to cook Turkish food, has Turkish friends, and even speaks the language.

There are three big teams in Istanbul: Besiktas, Galatasaray and Fenerbahce. Every team has its own football stadium, so on Sundays people wear the colors of their team. There’s a strong rivalry dating back to the 18th century, and the fans show immense support for their team.

Right after the 2002 FIFA World Cup, there were a lot of soccer exchanges. A handful of Turkish players were recruited by Korean teams, and Korea's Lee Eul-yong was scouted by the Turkish team Trabzonspor.

It seems we haven’t explored all of our possibilities in sports. There are lots of good players in both countries.

-Over the past 60 years, Korea and Turkey have expanded cooperation on infrastructure, education and sports. What's your vision for the next 60 years of Korea-Turkey partnership?

I believe the next 60 years will be even better. The geographical distance between our countries is quite considerable, but there are many possibilities.

We already have good contacts on the political side, even on the military side. We're cooperating on the defense industry, and diplomacy is one area in which we have exemplary relations. Together, we founded the MIKTA group, the partnership between Mexico, Indonesia, Korea, Turkey and Australia, which is a rising star in the diplomatic world.

Turkey has good infrastructure, an educated workforce, and the convenience of location for transport. We also have a customs agreement with Europe. This is part of the reason why over the years Korean companies have set up bases in Turkey.

- There's been news that the Turkish Embassy will be moving to a new location.

Yes, the Turkish Embassy is in transition. We've been in Yongsan-gu for the past 18 years. We have plans to relocate to Jung-gu in May. The move coincides with the 60th anniversary of the Korea-Turkey diplomatic relationship. There will be a ribbon cutting ceremony attended by representatives from both countries.

- Starting in May, there will be a number of events happening around Seoul to celebrate the "Turkey Culture Year in Korea." What kinds of events and festivals can we look forward to over the next year?

This year is important for both of us. It's the "Turkey Culture Year in Korea" and the "Korea Culture Year in Turkey." Both embassies will be organizing events starting in May, starting with the embassy opening, including concerts, food festivals, symposiums, performances and exhibitions. We have lots of things in store.

- Finally, in your opinion, what three adjectives best describe the Korea-Turkey relationship?

Brotherhood, social and cultural affinity, and partnership as middle powers.