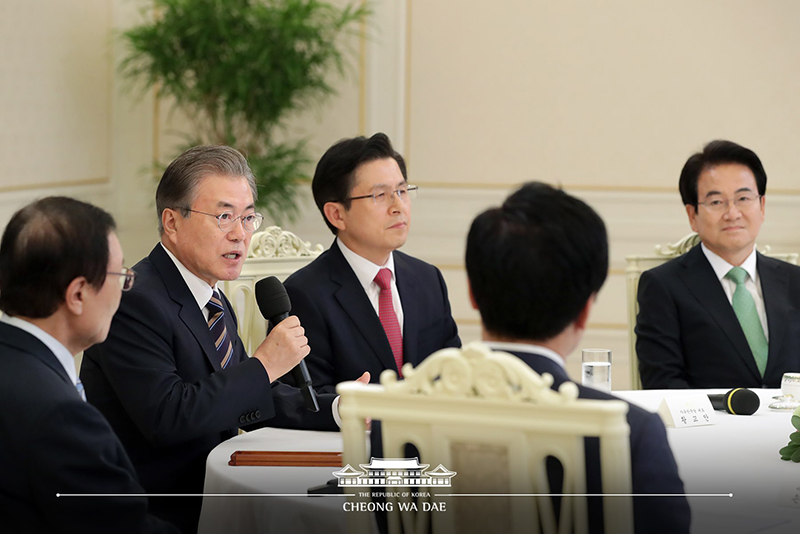 President Moon Jae-in on July 18 hosted a meeting with the heads of the country's five major political parties on Japan's export curbs on Korean companies, and a joint statement was released following their talks.

The statement said the president and the party chiefs agreed that "Japan's export restrictions go against free trade and are a form of unfair economic retaliation that severely damages amicable relations between Korea and Japan."

They also urged Tokyo to immediately retract its export restrictions on Korean companies for core materials used in semiconductors and digital displays. Saying a wide range of diplomatic efforts was needed to tackle the issue, the statement warned that Japan's attempt to remove Korea from the former's white list of trusted importers will jeopardize not only bilateral relations but also security cooperation in Northeast Asia.

Pledging bipartisan collaboration on the matter, the president and the party chiefs agreed on joint efforts to reduce the damage inflicted on the Korean economy by the sanctions and boost the competitiveness of the domestic materials, parts and equipment industries.

Moreover, their meeting decided on the launch of a "pan-national body for emergency cooperation."

President Moon started the meeting by saying, "Addressing Japan's export curbs is the most pressing and urgent issue at hand. We must pool our wisdom to find ways to reduce our reliance on Japan for the supply of core manufacturing materials."