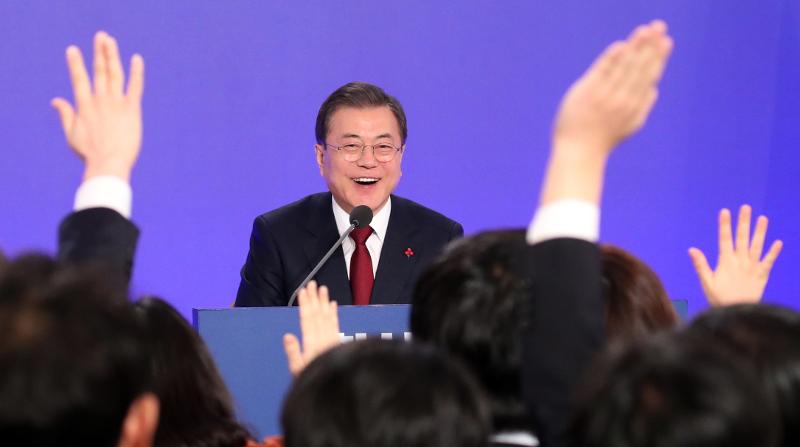 By Kim Eun-young and Lee Jihae

President Moon Jae-in has pledged to create "an innovative, inclusive and fair society in which an era of peace can be felt."

On Jan. 14 at 10 a.m., the president hosted his new year's news conference in front of about 200 invited domestic and foreign journalists at Yeongbingwan Guest House at Cheong Wa Dae. He announced his goals for overall national affairs such as diplomacy and economy for 2020.

The news conference was held in the format of a town hall meeting and lasted about 110 minutes, with no moderator. Instead, the president selected those to ask him questions.

On the peace process on the Korean Peninsula and relations between the U.S. and North Korea, he said, "U.S.-North Korea relations are in a stalemate but things can work out if we expand cooperation through inter-Korean dialogue," urging measures to boost inter-Korean ties to facilitate Pyeongyang-Washington dialogue.

President Moon also cited examples of inter-Korean sports exchanges such as the proposal to have a unified inter-Korean team enter the opening ceremony of the Tokyo Summer Olympics in July and the bid by both Koreas to jointly host the 2032 Summer Olympics.

"We can accomplish many things within the limited range of boundaries (international sanctions)," he said.

"Because inter-Korean relations are our task, we must show a determination to resolve this more independently."

"We will find common ground among China's One Belt One Road and Korea's New Southern and New Northern policies and expedite them."

He added, "The leaders of the two countries agree that with 2022 marking the 30th anniversary of Korean-Chinese ties, both nations will raise the level of bilateral relations."

On ties with Japan, President Moon said, "If matters that are relatively easier to solve such as Japan's export regulations and the General Security of Military Information Agreement (GSOMIA) are resolved quickly, this will immensely help in rebuilding trust between the two countries."

As for the Korean Supreme Court's ruling on Japanese corporations that used forced Korean laborers during the World War II, he said, "The Korean government has proposed solutions multiple times."

"The Japanese government must devise measures that are acceptable to the forced labor victims."

"The key is coming up with a solution acceptable to the victims," he added.

President Moon also said he will focus on achievements in the economic field.

Forecasting last year's economic growth at around 2%, he said, "The economic growth rate is lower than that in the past, but Korea ranks second after the U.S. in the '30-50 club.'"

The group comprises nations each having a population of at least 50 million and per capita income of USD 30,000 or higher.

The president said, "The new year will record higher economic growth than last year," adding, "The government will do its best to tangibly enhance quality of life."