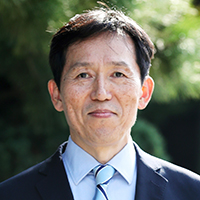 North Korean leader Kim Jong Un, whose official title is chairman of the North's State Affairs Commission, on Dec. 28 last year condemned the U.S. for violating a bilateral agreement with Pyeongyang in a speech to the Central Committee of the North's ruling Workers' Party. In his de facto New Year's speech to his nation, Kim warned of a return to "positive and offensive measures" and unveiling of a new strategic weapons program. This suddenly gave rise to the possibility of another North Korean nuclear crisis on the Korean Peninsula like the one in 2017.

When North Korea and the U.S. in June 2018 held their first bilateral summit in history in Singapore, huge strides were expected in the process of the North's denuclearization and the establishment of peace on the peninsula. Since their second summit early last year in Hanoi produced no deal and subsequent working-level talks in Stockholm broke down, however, the denuclearization process remains in a stalemate. As a result, Seoul's tasks in 2020 are to prevent another North Korean nuclear crisis and restart the peace process.

The potential for both another nuclear crisis and the collapse of an agreement on the North's nuclear program are nothing out of the ordinary for the peninsula.

Rather the atmosphere in the region is more of déjà vu because of the situation's commonalities with the seven minor or major nuclear crises involving the North occurring throughout the past three decades, based on my own rough calculation. As such, agreements on the North's nukes have been concluded and then broken. Every time this cycle repeats, the crisis -- large or small -- results in a worsened reality and heightened distrust between both Koreas and between Pyeongyang and Washington. In the meantime, the North has continued developing its nuclear capability.

Though North Korea can never be recognized as a nuclear weapon state under the Nuclear Non-proliferation Treaty, a foregone conclusion is that the North is a "nuclear-armed state" with nuclear weapons. Seoul and Washington have utilized numerous diplomatic resources toward Pyeongyang's denuclearization, but in vain. Thus in the run-up to the looming prospect of yet another nuclear crisis, discussion is needed on previous approaches to this problem to avoid further trial and error.

The nuclear crisis of 2017 sparked major controversy over policy toward the North's nukes. At the time, the five main policy options presented were 1) strategic patience based on pressure from sanctions; 2) balance of fear through bolstering nuclear deterrence; 3) coexistence with a nuclear North Korea; 4) forced denuclearization via regime change or military measures; and 5) the establishment of a peace regime.

First, the Obama administration adopted the "strategic patience" option but this policy failed and consequently allowed the North to increase its nuclear capability. Second, the last remaining option is balance of fear if nuclear diplomacy with the North is a complete failure. This would involve living in fear of both the North's nukes and the threat of war. Third, coexistence with a nuclear North Korea is unacceptable because this would require Seoul's recognition and acceptance of Pyeongyang's nuclear weapons and force the South Korean people to live in daily fear of this nuclear threat. Fourth, the concept of "forced denuclearization" has been around since the 1990s but its chances of adoption are low because of the high risk of war breaking out.

The Moon Jae-in administration, which took office in 2017, selected the fifth option of establishment of a peace regime.

This option is the most realistic and the one worth pursuing, as the other four choices incur a higher possibility of war and a low possibility of adoption. Building a peace regime must be done simultaneously with the North's denuclearization. Above all, hostile relations between the two Koreas and those between North Korea and the U.S. must end because these served as the two main pillars of the peninsula's Cold War political structure. Instead, normalized ties between both Koreas and between Pyeongyang and Washington are needed. With efforts toward the setup of a politically driven peace regime, the legal completion of a peace process is possible through a formal declaration of the end of the Korean War and conclusion of a peace treaty.

Despite the stalemate in North Korea-U.S. dialogue and its potential effect of regression in inter-Korean relations, President Moon Jae-in made timely comments that he will pursue improvement in inter-Korean cooperation to find a tangible breakthrough for the problem.

This is because inter-Korean cooperation projects can serve as a wonderful alternative for Seoul to overcome problems incurred in previous processes of trying to resolve inter-Korean issues through improving relations between Pyeongyang and Washington. Such projects include the resumption of tours to the North's scenic Geumgangsan Mountain, the reopening of the inter-Korean Gaeseong Industrial Complex and joint development of the Demilitarized Zone.

Early this year, North Korea mentioned the possibility of developing strategic weapons in potentially igniting yet another nuclear crisis. As a response, the key is to prevent another crisis and resume dialogue on denuclearization and the peace process. To this end, both Koreas should hold a summit and the U.S. should hold one with the North. In addition, the leaders of the two Koreas and the U.S. should simultaneously push for the North's agreed denuclearization, normalization of ties between Pyeongyang and Washington and a permanent peace structure on the peninsula.

Jun is a professor at the Department of Security and Unification Studies of the Institute of Foreign Affairs and National Security (IFANS), a think tank under the Korean National Diplomatic Academy in Seoul.